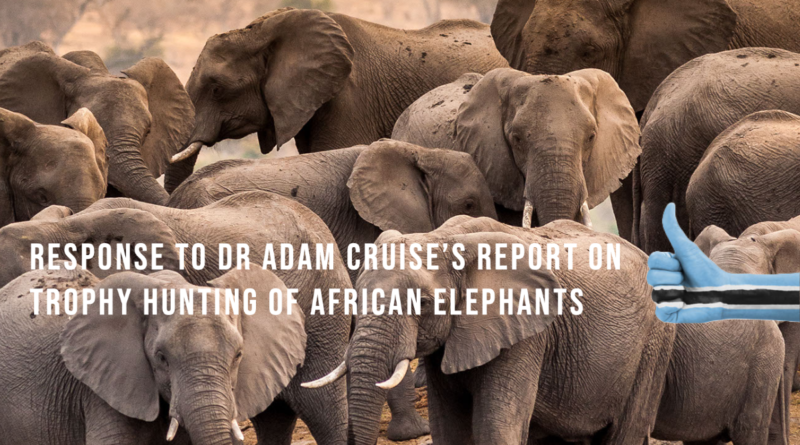 1. The Department of Wildlife and National Parks (DWNP) notes with concern and disappointment a report by Dr Adam Cruise titled Investigation into the trophy hunting of elephants in Botswana’s Community-Based Natural Resource Management, which work was funded by Fondation Franz Weber. The below information is for the public to have a clear understanding of the Government’s policy of sustainable utilization of its natural resources for the benefit of Batswana.

2. The hunting ban was lifted in May 2019 and it was informed by the recommendation of a Presidential Sub-Committee of Cabinet that was tasked to initiate a social dialogue aimed at reviewing the ban on hunting. The process entailed rigorous nationwide consultations through various platforms including Kgotla meetings, consultation with Local Authorities as well as other stakeholders, including Community Based Organisations. Therefore, the decision to include sustainable hunting as an option to the utilization of natural resources for the benefit of the local communities was made on the basis of improving rural community livelihoods. These are the people who bear the brunt of living next to wildlife especially elephants.

Some of the reasons that resulted in the decision to resume hunting including that of elephants were;

a) Increased human-elephant conflicts which resulted in many members of the communities losing their lives,
b) Negative impacts on community livelihoods as a result of loss of income from hunting.

3. In 2021, the Government developed the Botswana Elephant Management Plan and Action Plan 2021–2026. The management plan detailed actions that the Government will undertake to protect the national elephant population and the potential areas of how communities can benefit from the utilization of elephants. As part of the process of implementation of the Botswana Elephant Management and Action Plan, the following actions have been undertaken;

a) Development of watering areas for wildlife in areas that do not have permanent water sources. This is meant to reduce the conflict between humans and wildlife especially elephants,

b) Capacitating the Department of Wildlife and National Parks through procurement of vehicles and other equipment for better wildlife monitoring activities and improvement on their response time to incidences of human wildlife conflict,

c) Continuation of payment of compensation of damages caused by wildlife to properties of people,

e) During the 2020 hunting season community based organisation accrued P28m through the sale of quotas whilst in 2022, P26m was accrued to CBOs through hunting quota sales. Funds that have accrued to Community Based Organisations after the sale of their quotas are being utilized within those communities contributing to improvement of community livelihoods and creation of employment. The funds accrued are utilised for developing other income generating projects such as accommodation facilities to diversify the income streams and increase job opportunities for the local people.

f)The funds that have been derived from the Special Elephant Quota are deposited in the Conservation Trust Fund (CTF). The funds are utilized 70% for elephant’s conservation projects and 30% for community development projects in the elephants range areas. Some of the projects that have been funded through the CTF includes electric fencing of cluster farms in elephant hot spot areas, agro-tourism projects and development of community tourism projects.

4. Botswana has over the years earned international accolades for her sterling efforts to conserve and manage her wildlife resources. This hard won reputation is the result of the implementation of wildlife policy that stretches back several decades and that continues to this day.

5. Elephants are an example of a species whose numbers have increased in Botswana as a consequence of judicious management by Government and its partners, including Community Based Organisations. Indeed, the World Conservation Union (IUCN) Red List released in March 2021, which assessed extinction risk of elephants, noted that while savannah elephants have declined across Africa, Botswana (and the Kavango Zambezi Transfrontier Conservation Area) are reporting stable or increasing populations, which attests to the successes of the approaches in use by the Government of Botswana, which includes trophy hunting.

6. The Cruise report further tries to cast doubt on the sustainability of the elephant quota in Botswana, stating that “In terms of conservation value, the national trophy hunting quota of 400 elephants in 2022 – a figure probably derived without any scientific basis – is likely to have negative consequences on elephant migration movements, reproductive abilities and conflict incidences. Current biological research points to a probable catastrophic scenario for elephants if the current elephant trophy hunting quota and elephant management policy continues.” It must be noted that elephant quotas in Botswana are set at a very conservative level, typically ranging from 0.04% to a maximum of 0.23 of the total huntable population (which is about 75% of the population). This is well below the ‘rule-of-thumb’ of 0.5% of the total population that hunting managers (including in Europe and America) generally use for wildlife off-take, and so there is no basis to the claim that the Botswana elephant quota is unsustainable nor catastrophic for the elephants.

8. Botswana as a member of CITES has a CITES-approved quota, which is negligible when one considers the elephant population in Botswana, and which quota would not have been approved by CITES if there was any suspicions that it would be ‘catastrophic for elephants in Botswana.

9. Hunting has been ongoing for only two seasons in Botswana after the lifting of the hunting moratorium. Therefore, there is no way that a conclusion can be made of the lack of impact on rural livelihoods from hunting. The Botswana Government through the Ministry of Entrepreneurship will be working with local communities to develop hunting value chains to increase job and business opportunities through processing of hunting by-products such as skins to develop value added products. The development of these businesses through processing of hunting by-products will add to increased job creation opportunities which are much needed in rural areas.

10. It must be noted that during the 2014 -2019 period of hunting moratorium, many CBOs in Ngamiland who were hunting and are in areas that are marginal to tourism such as, Phuduhudu, TSM Management Trust, Cqaecqae Tlhabololo Trust, and Qwanga lost all of their income and couldn’t function. Despite many attempts to identify investors to partner with the communities to develop photographic tourism ventures in their areas the concessions areas never attracted any possible investor. The lifting of hunting has injected income into the CBOs which will be allow the CBO to develop projects to create employment opportunities.

11. The Department of Wildlife and National Parks would like to inform members of the public that it is available to provide information on hunting of elephants and any other information related to sustainable utilization of wildlife resources in the country. Therefore reports such as the one by Dr Adam Cruise should be disregarded as they are part of a crusade against trophy hunting, and against empowerment of local communities to derive benefits from the resources found within their locality. There is no scientific basis nor backing for any of the allegations that have been made in the report including the financial figures that are mentioned. The author has not engaged any of the CBO Boards who would have provided the financial information required for such a study.

12. We appreciate the interest of the media and private researchers in reporting on wildlife conservation and management in Botswana but such reporting should be factual and objective. The views of both photographic and hunting industries should be brought together for balanced reporting on the benefits of the two wildlife utilization options.

13. Lastly, we urge the authors of such publications to consult the Department of Wildlife and National Parks as the wildlife authority in the country to facilitate informed and factual reporting.

PRESS RELEASE ON TROPHY HUNTING OF AFRICAN ELEPHANTS IN BOTSWANA22 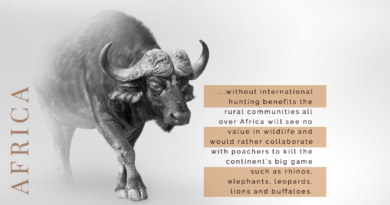 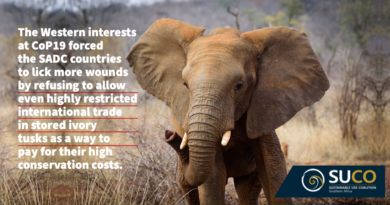 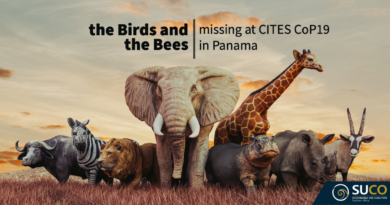 Spatial Aspects of the Wildlife Economy

A Potential Negative Vote – The Kiss of Death for CITES?