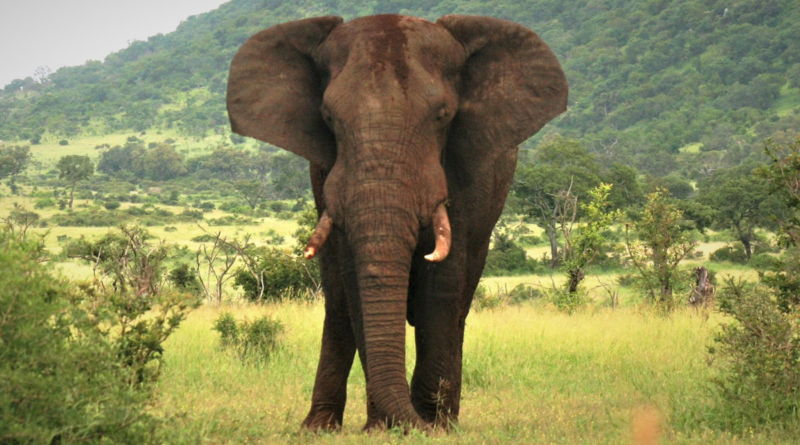 7th Jul 20218th Dec 2021643 Views 10 min read
On the subject of “trophy” hunting. The term “trophy hunting” conjures up the idea that trophy hunters ONLY take the “the biggest and the best” bulls  – the prime breeders – from breeding herds of wild animals.

This is sometimes the case, but is more often not.  And the animal rightists – whose purpose in life is to abolish all animal “uses” by man (including the keeping of pet dogs and cats; and stopping people from eating meat) – have led the world into believing that trophy hunters remove the biggest and the best breeding bulls from Africa’s wildlife populations (Wow! You will say, surely that must be deleterious for the species?).  Neither of these assumptions – these blatant animal rightist “lies” – is true.

Most hunters treasure the act of hunting because it enables them to get out of their offices, to spend time communing with nature and to experience some historical interaction with wildlife.

Wild venison is also the purest red meat on the planet.  Wild game animals do not have to endure any kind of hormone, steroid antibiotic injections – to which cattle sheep and goats are subjected; and venison is not produced at the cost of ANY fossil fuel energy.

So hunting is not just carried out in pursuit of a “lust to kill”.  Furthermore, the act of killing an animal is not “cruel” – as the animal rightists keep telling the world. “Cruelty” is the infliction of pain and suffering on an animal (or human) where the perpetrator PURPOSEFULLY has the intention of creating “pain and suffering”.  For the action of killing to be “cruel” there MUST be the “intention” to cause pain and suffering.  And hunters – and the people who kill cattle, sheep and goats in an abattoir – do not kill WITH THE INTENTION of causing pain and suffering.  So now I hope you have started the process of “seeing” that animal rightists are “fraudsters”.  They tell lies to make money out of a gullible public. Don’t believe them.

I operated as a Professional Hunter in South Africa’s Great Karoo for three years (and after my great free-range and fair chase big game hunting experiences of 30 years in Rhodesia’s {now Zimbabwe’s national parks department} I did not enjoy taking other hunters out on “trophy hunts”.  So I turned my hand to something else.) If you look through my personal website carefully, however, you will quickly determine that I have done more big game hunting than, perhaps, anyone else alive today.  So my “hunting experience” is very extensive.  And I draw my general wildlife management (conservation) ideas, and big game hunting concepts, from a total of 58 years of working “at the coal face”.

Most honest hunters do not HAVE to shoot”the biggest and the best bulls” of the animal species that they are hunting.  Most are quite content to collect what is called in the professional hunting trade a “representative” trophy – which is an animal with horns the size of which is “average” – and which, therefore, is simply a good “representation” the species concerned.

Even “representative trophies”, however, are still called “trophies”.    The hunter then gets satisfaction from the “nature and quality of the hunt” rather than the size of the horns on the animal that he has killed.

Having said that, however, many hunters DO “go for the biggest and the best” and they can be quite a “pain-in-the-backside” when they don’t get exactly what they want.  By the time a male animal achieves a record horn size – or “near” record horn size – however, they are old and they have stopped breeding.  And – during their younger breeding years – they long ago passed on their genes to the next generation aplenty. So killing old bulls with big horns probably does the LEAST damage to the genetics of breeding populations.  And by that stage most of these old bulls,  anyway, have long ago left the company of the breeding herds.

The proof of the pudding, however, is in the eating.  Despite the fact that trophy record books have been in existence for many decades  – some for over a hundred years – today, in most species of animals in Africa, world record horn lengths are being taken all the time.   And this would not happen if trophy hunting was bad for the genetics of a species.

I, personally, have NEVER been a trophy hunter.  I hunted elephants and buffaloes and lions, etc. – a plenty – over a c.30 year period in my life- because it was my job to do so.  I shot them because whatever I was hunting had over-populated their habitats;  because they were crop-raiders or stock killers or man-eaters; or because they were a threat to the health of domestic stock.   I actually have no real or personal interest in trophies – but I am still an avid hunter at heart.  I love the danger, the craft-of-stalking, and the expertise that goes into killing an animal cleanly and humanely at the end of a hunt.  So I don’t have an axe grind when I discuss “trophy hunting”.

The fact that there are lots of people who are “trophy hunters”, however, is good for the economy of wildlife management in Africa and for that reason alone I am a strong supporter of trophy hunting. In my book there is NO controversy surrounding “trophy hunting”.  Whatever controversy there is has been manufactured by the anti-hunting animal rights brigade in their bid the generate an emotional response to their interpretations of hunting or trophy hunting.  They do this for the sole purpose of hyping up public opinion with the purpose of persuading them to part with “donations” – which the animal rightists say will be used to STOP hunting.  But that money is NOT used for that purpose at all (or any other such purpose).  It is simply slipped into the bank accounts of the animal rightists who conjure up this kind of money-making propaganda.

I actually don’t think there is much difference between any kind of hunting.  I view wild animals as being WILD “products of the Land” and domestic animals as TAME “products of the land” – and I believe that BOTH should be used sustainably and wisely for the benefit of mankind.

Hunting, therefore, when done wisely and sustainably, is able to maintain the desirable balance between the soil, the plants and the animals on any piece of ground – which, under wild conditions, also creates a stable ecosystem.

So in the wildlife arena in South Africa, hunting-equals-harvesting. Hunting “ethics” then takes a back seat in the car. There is, anyway, no such thing as “ethical hunting”. “Ethics” is what hunters practice when they are hunting alone.

“Ethics” is a very personal “thing”. And when you are on a game ranch that is working towards “making a profit” – when the ranch owner has to shoot (say) 500 springbuck – because that it his management quota – he might use fee-paying hunters to shoot these animals for him from the back of a vehicle and/or at night in the light of a powerful spotlight (which are both so-called “unethical” hunting practices).

You THEN have to consider the priority considerations. Is the priority that you hunt “ethically” – on foot (walk and stalk) – or that you kill 500 springbuck as quickly as possible? Nothing is really as simple as it seems.

Wildlife is a commodity in southern Africa. It is bought and sold all the time. And if the business arrangements are good, it benefits man and nature equally.

Since the 1980s, South Africa has been following a progressively more rewarding wildlife management policy based upon the sustainable and wise-use of its wildlife.

Private ownership and “making money” out of wildlife has been the driving force behind its success. And hunting (including trophy hunting) is the biggest contributor.

In the 1980s there was very little wildlife left in South Africa outside the country’s national parks.  For 150 years wildlife in South Africa was res nullius – it was owned by nobody and hunted by everybody.  And no private ownership of wildlife was allowed. From 1991 onwards, all this changed.

Today – 25 years later – many cattle ranches and one-time crop farms have been converted to game ranches.  There are now some 16 million head game animals in private ownership in South Africa  – all thriving – compared to 6 million in the country’s government controlled national parks.

There are now well over 10 000 game ranches in the country covering more than 3 times the size of all our national parks and other protected areas combined.   Game ranching is more than 3 times as lucrative a land-use business as is conventional domestic stock farming.

The wildlife industry now permanently employs over 100 000 people.  20 percent of all red meat in the country is venison.  Altogether, the wildlife industry contributes 20 billion South African Rands to the country’s GDP every year – a large proportion of which comes from so-called trophy hunting.   And the industry is still expanding at an exponential rate. So if you want examples of just how hunting and/or trophy hunting provides positive impacts on our wildlife resources, this is it.   Because of the money that hunting (including trophy hunting) brings into the wildlife industry, its profit-incentive has been attracting ALL the investment that has resulted this GIGANTIC “conservation” success.  So – rather than try to provide you with a specific (small) example of how trophy hunting benefits wildlife – I give you this general landscape scenario to prove my point.

There is no such thing as an “endangered species”. That concept is the greatest fallacy of all within the realm of wildlife management.

And attempts at its application have always resulted in the the biggest MIS-management of Africa’s wildlife than has ever been witnessed before. Why? Because animals cannot be managed at the “species level”. They can only be managed at the population level.

Some populations, for example, are “UNSAFE”; and they require “protection from all harm” management. Others are SAFE. These populations need to be culled annually to make sure they never exceed the carrying capacities of their habitats. SAFE populations can be harvested and/or hunted; they can be used sustainably. Finally, some populations are excessive (or grossly excessive) – that is, there numbers are FAR above the carrying capacity of their habitats. Excessive populations need “drastic population reduction” to bring their numbers down to a level that their habitats can sustainably support. So when a species – comprising all these different kinds of populations – is declared to be “endangered” and “protection from all harm” management is applied to them ALL – in the same way – the SAFE and EXCESSIVE populations are mismanaged. IPSO FACTO – the concept of “endangered species” is a fallacy.

Finally hunting is a natural instinct of man. Some of the world’s leading psychologists have stated that it is healthy for man to hunt. They also say that to suppress that instinct is bad for man’s mental health. Studies throughout the United States have shown that in those communities where the sale of hunting licenses is high, violent crime within those communities is low. And where hunting license sales increase violent crimes decrease – and vice versa.

I hope THIS little dissertation will be of help to you. 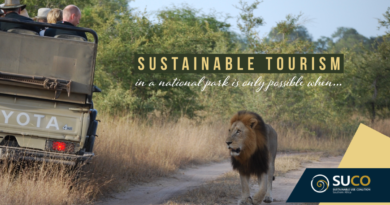 Sustainable Tourism in a National Park is Only Possible When… 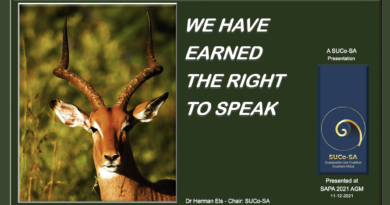 We Have Earned the Right to Speak

By Dr Herman Els SUCo-SA’s is focused on enhancing the right of our >70,000 members to practice their chosen hunting