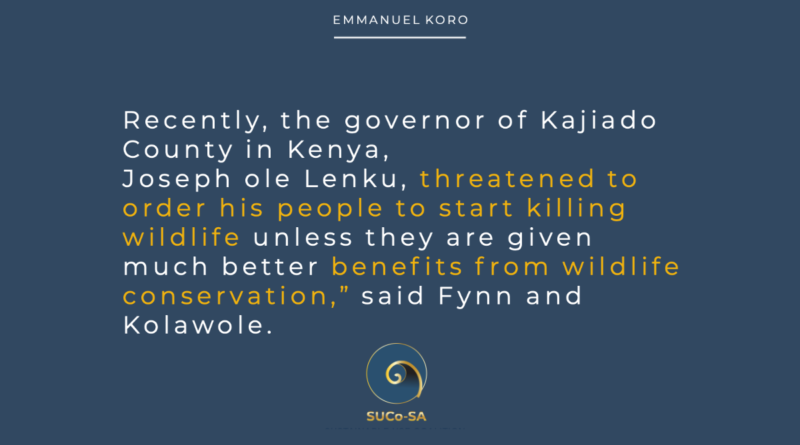 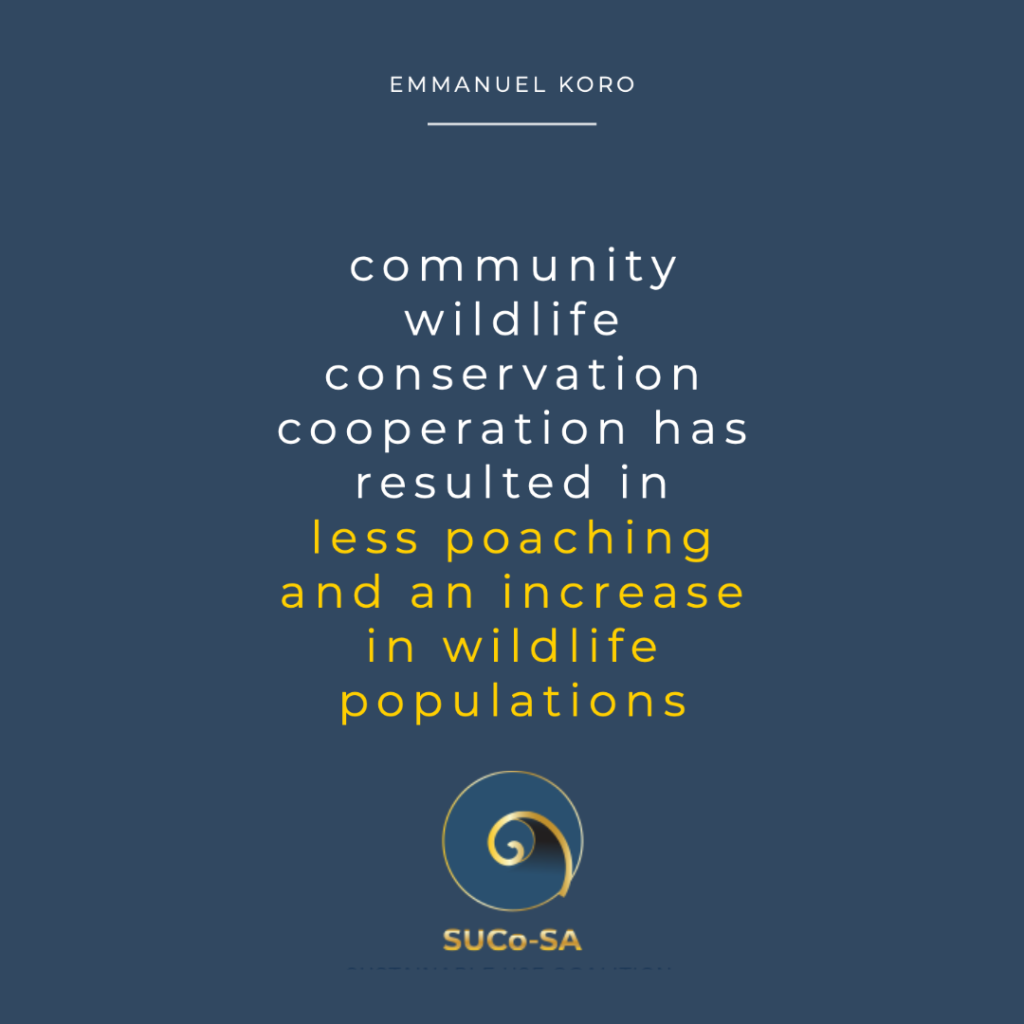 Why should African rural communities co-existing with wildlife and receiving zero benefits from it bother conserving wildlife that damages their crops, kills their livestock, loved ones and destroys their property?

This is the key wildlife conservation question that all African states had to address as they took over from the colonial rulers who forced rural communities to co-exist with wildlife to conserve it, despite the fact that they did not benefit from it.

Under independent Africa, it was always going to be undemocratic, violation of human rights, political suicide and a wildlife conservation disaster for any government to force rural people sharing the land with wildlife to conserve wildlife without benefiting from it. The communities would predictably refuse to conserve wildlife that doesn’t benefit them as happened during the colonial era.

“Decades of colonialism in Africa alienated its people from their traditional use of wildlife,” said the chairman of the SADC Wildlife Technical Coordination Unit, Matthew Matemba in his foreword for Proceedings of the Regional Natural Resources Management Conference, held in Botswana’s tourist town of Kasane in 1995.

“The majority of poachers ended up in the hands of ‘game guards’ and eventually went to the gallows. This situation sparked decades of antagonism and resentment between the so-called ‘game officers’ and local communities.”

Communities co-existing with wildlife protested the lack of benefits by poaching it.

This demonstrates that resistance of authorities is a key element sustaining the viability of poaching,” said Richard Fynn and Oluwatoyin Kolawole in their recent commentary entitled  ‘Poaching and the problem with conservation in Africa’.

Richard Fynn and Oluwatoyin Kolawole said that poaching, as an act of resistance, is achieved through informal rural social networks. They hide and even encourage poachers and the middlemen to poach “game and buy meat, ivory, and rhino horn.”

Therefore, in 1995, the SADC Natural Resources Management Programme was used to shape a future where international hunting should be included on the region’s wildlife and habitat conservation agenda.

“It was quite clear during the Kasane SADC Natural Resources Management Programme Proceedings that local community participation in the management of wildlife resources [including direct benefits from international hunting] not only restored decades of lost confidence and trust in states, but also a highly charged sense of responsibility and ownership of wildlife by rural communities,” said the SADC Natural Resources Management chairman, Matemba.

Today, international hunting is being practised with great wildlife and habitat conservation support and success from rural communities co-existing with wildlife and benefiting from it, in African states involved in international hunting. Such community wildlife conservation cooperation has resulted in less poaching and an increase in wildlife populations. This was revealed in presentations by the government, safari hunting companies and rural communities representatives who attended the Victoria Falls November 2019 Safari Club International Foundation African Wildlife Consultative Forum.

“It must be understood that hunting is the economic engine for sustainable conservation of iconic wildlife,” said CEO of Safari Club International, Switzerland Office,  Mr Antoine Spillmann in a September 2020 published paper entitled ‘Trophy Hunting.’ “In the United States, game wardens’ salaries come from state conservation services which are largely funded by hunting related income.”

The international wildlife hunting socioeconomic benefits that communities co-existing with wildlife are receiving in post-independent Africa include financing the construction of much needed rural infrastructure ranging from roads, clinics, schools and boreholes.

Despite the opposition from Western animal rights groups, international hunting is an internationally recognised wildlife management and conservation method. The UN Convention on International Trade In Endangered Species of Fauna and Flora Species (CITES) allows hunting of all wildlife, including endangered wildlife as long as it’s not harmful to the hunted population. Old wildlife bulls that are no longer of reproductive value are the ones that get hunted. When the old male predators are no longer able to actively hunt their own prey, they start moving into rural communities for easy prey that includes humans and livestock. This increases human wildlife conflict. That’s the other reason why such animals need to be cropped out.

Unfortunately, Kenya is working against international wildlife hunting. This is against the wishes of the Kenyan people co-existing with wildlife and would like to  benefit from it.

Recently, the governor of Kajiado County in Kenya, Joseph ole Lenku, threatened to order his people to start killing wildlife unless they are given much better benefits from wildlife conservation,” said Fynn and Kolawole.

According to South Africa based leading African elephant management specialist Mr Ron Thomson, Kenya has been captured by Western animal rights groups. Mr Thomson said that Kenya signed an almost unbreakable anti-international hunting contract dating back to its independence from colonial rule in the 1960s under which the Western animal rights groups committed to continuously fund the entire Kenya Wildlife Services in exchange for a permanent international hunting ban.

“Kenya is in a bind and, even if they wanted to, they cannot get out from under the animal rights influence.”

At the start of the 21st Century, the Southern African rural communities, working with Mr George Pangeti of the Safari Club International and the Africa Resources Trust now called ResourceAfrica,  invited Kenya to come and witness the necessity of international hunting to wildlife conservation in Southern Africa.

The entire Kenyan delegation that included government officials, politicians and rural communities and Kenya Television Network was impressed with the hunting benefits that it witnessed. They visited hunting communities of Zimbabwe’s Hwange District, Maun and Chobe in Botswana and Namibia’s Caprivi Strip hunting communities. Accompanied by their  deputy minister of environment, the Kenyans were expected to return home and recommend to parliament the introduction of international hunting as a necessity to wildlife conservation.

Sadly, it never happened in a country that has been long captured by Western animal rights groups.  It was ignored. It remains to be seen when Kenya will learn that wildlife conservation success is impossible in Africa without international hunting.

This article appeared in the NewEraLive.na

*Emmanuel Koro is a Johannesburg-based international award winning independent environmental journalist who writes and has written extensively on environment and development issues in Africa. 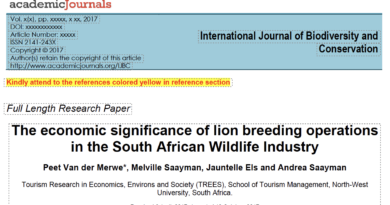 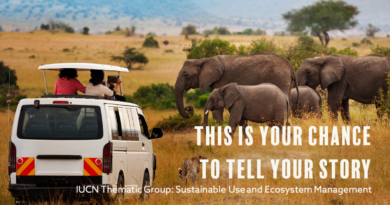 Dear SUCo-SA members, I am now Lead for the IUCN Thematic Group: Sustainable Use and Ecosystem Management. The principle project 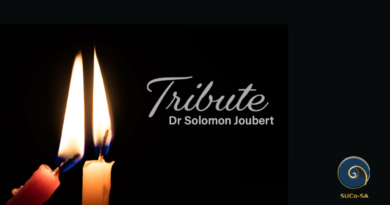